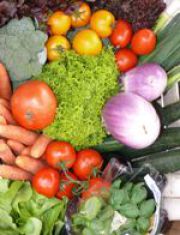 In 2003, Nuremberg City made the unanimous decision to support the production and consumption of organically grown food. This decision was renewed on 15.10.2008. The share of organic food offered in schools, nursery schools and on the weekly markets is to be increased to 50 per cent, and the share in municipal institutions and at municipal events to 25 per cent. At the same time, the percentage of fields for organic production is to be increased to 10 per cent.

Internationally, the City of Nuremberg is part of an organic network. In December 2006, the City Council decided to join the network of cities “Città del BIO”. Nuremberg was the first German city actively participating in this network, but in the meantime has found domestic co-operation partners, including Lauf and Altdorf, two cities from the region.

To encoded transmission of your message:

URL of this page
<http://www.nuernberg.de/internet/umweltreferat_e/organic_metropolis_nuremberg.html>