Appreciation of the Jury

On Sunday, 28 September, 2014, the jury of the Nuremberg International Human Rights Award, chaired by the Lord Mayor of the City of Nuremberg, met in the City Hall and came to the following decision concerning the eleventh award: 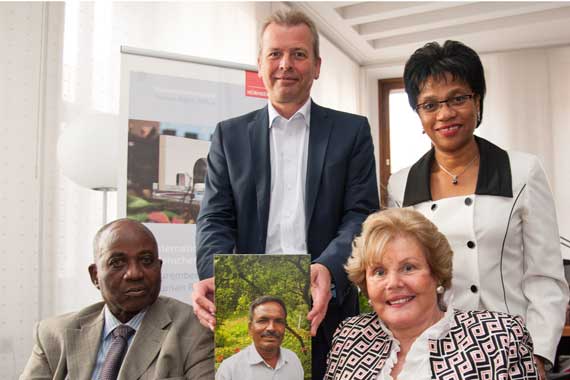 The award winner is Amirul Haque Amin from Bangladesh

The Award will be presented in Nuremberg Opera House on Sunday, 27 September, 2015.

Amirul Haque Amin has been fighting for workers’ rights with admirable courage. He is president and co-founder of the National Garment Workers Federation (NGWF), the largest national trade union in Bangladesh, established in 1984. With great persistence and courage, this trade union has been fighting for the improvement of living and working conditions and thus for the dignity of workers in the export-oriented garment manufacturing industry in Bangladesh.

Numerous violations of labour rights occur in the textile and garment industry, not only in Bangladesh but in other southern countries as well. While some progress has been made, much more is needed. Bearing in mind the devastating collapse of the Rana Plaza building in Dhaka which led to 1,135 worker fatalities and over 2,000 persons injured, the jury wants to appeal to the fashion companies whose products were manufactured in this factory and who have not yet paid any compensation. Moreover, the jury decision should be seen as an appeal to the entire garment industry to ensure that good working practice is adhered to in all elements of the manufacturing chain.

By awarding the 2015 Nuremberg International Human Rights Award to Amirul Haque Amin, the international jury for the first time honours an activist who fights for social and economic human rights. By doing this, the jury would like to draw attention to three topics: on the one hand to the protection of workers’ rights on a local level. In Bangladesh, union work is extremely dangerous. Activists not only risk being fired, when they take a stand against horrible working conditions; but they are frequently harassed, threatened or arrested. The jury hopes that the award will offer Mr. Amin and his fellow activists the protection needed to continue their necessary fight for humane working conditions. Furthermore, the jury wants to appeal to consumers’ consciences and raise their awareness for responsible consumption. The public has a right to know where and how their garments are produced. Not least, the jury wants to see its decision in the wider context of economic ethics, for globalised and free trade without adherence to social standards is contrary to all human rights requirements.

To top of page URL of this page
<http://www.nuernberg.de/internet/menschenrechte_e/jury_appreciation_amin_e.html>