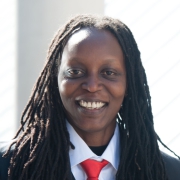 After the deadly attack on a gay man, there is a growing concern about a new spiral of violence against LGBTI in Uganda.

In recent weeks, there are contradictory statements about the reintroduction of the so called "Anti-Gay Law", which the Consitutional Court suspended in 2014 due to procedual errors.

Ethics and Integrity Minister Lokodo told the Thomson Reuters Foundation, the law will be reintroduced in parliament in the coming weeks and is expected to be voted on before the end of the year. At the same time, the government spokesman denies the plans to reintroduce a law that provides death penalty or life imprisonment for homosexuals.

In order to provide clarity on the facts relating to this reporting and offer strategic guidance to partners, the leadership of the LGBTQI community and Civil society activists met in Kampala on October 17, 2019.

Kasha Jacqueline Nabagesera, born in 1980, is a Ugandan LGBT (Lesbian, Gay, Bisexual and Trans) activist, advocating for the rights and an improvement of the living conditions of lesbian, bisexual and transgender in Uganda. Already at the age of 21 years she engaged in the very “controversial” issue of gay rights in Uganda and started building a strong movement. After being expelled from several schools, Kasha decided to study the law in Uganda and find a way forward. An accountant by profession, she has excelled in human rights advocacy and obtained a certificate in human rights law. For the past four years she has been speaking at international fora highlighting the plight of lesbian women in her country. But perhaps more importantly, Kasha has had the courage to appear on national television in Uganda, becoming one of the first gay people to openly speak out. Similarly, she has issued press statements on behalf of the gay community, and spoke on several radio stations.

She had to challenge the homophobia frenzy in the media in the high court of Uganda where she and two others have sued a newspaper called Rolling Stone, which on 2nd October 2010 called for the hanging of homosexuals. After the release her comrade and gay activist David Kato became a victim of assassination.

She founded Freedom and Roam Uganda (FARUG), an organization to support her fight for the rights of marginalized communities within the Ugandan LGBT rights movement. In 2007, she appeared at the World Social Forum in Nairobi and spoke in front of 60.000 people about the respect and tolerance of homosexuals in the world. In reaction to that, she became a victim of violent harassment. Since then she has been shifting from house to house, afraid to stay long in the same place.

She has consistently invoked international covenants that Uganda has ratified and the Government has failed to implement. Many countries in Africa have an environment that is a extremely hostile for LGBT issues but Kasha continues to work there.

The Ugandan parliament, most intensively since 2011, debates about legislative proposals criminalizing Homosexuality to the point of death penalty.

Therefore, it is especially the work of FARUG that is being constrained by the government, for example within the framework of the breaking-up of a “Gay and Pride” – Parade in 2012. Also, the imprisonment of Kasha Nabagesera has been demanded.

In March 2011 she received the Martin Ennals Award.
In September 2013 the Nuremberg International Human Rights Award.
In June 2015 she was featured on the cover of TIME Magazine, Europe
In November 2015 Kasah J. Nabagesera received the Right Livelihood Award.

To top of page URL of this page
<http://www.nuernberg.de/internet/menschenrechte_e/nabagesera_e.html>