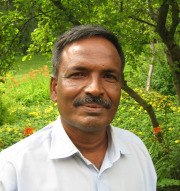 Amirul Haque Amin is the president and co-founder of the National Garment Workers Federation (NGWF), the largest national trade union in Bangladesh. The organization, which is based in Dhaka, has been committed to the rights and dignity of workers in the export-oriented garment manufacturing industry in Bangladesh since 1984. It maintains offices in Dhaka, Chittagong, Savar and Tongi.

For better working conditions in the garment industry

Amin has been an advocate of workers’ rights for more than 30 years. His interest in helping workers organize into unions for the betterment of Bangladeshi society began when he was a student. In 1981, while studying at the University of Dhaka, Amin became involved in an internal trade union known as the Dhaka City Tailoring Workers Union. Due to the many problems within factories this employees’ representative body transformed into the national representation of NGWF.

Amin demands better working conditions, specifically fair wages and a safe workplace environment. As such, his organization is committed to strengthening the trade union movement and protesting against the catastrophic conditions in the garment industry in Bangladesh.

NGWF challenges labour rights abuses by turning to the female workers in the textile industry. It advises and supports the women in their protests against the employers, which includes the formation of trade unions as well as training sessions. It also turns to the government, foreign corporations or the factory owners themselves to make their demands for e.g. fair wages. 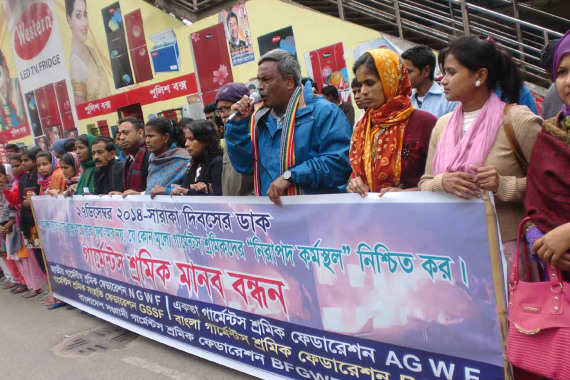 Some hundreds of garment workers today formed a human chain in front the National Press Club in Dhaka to commemorate the 'Saraka Day' (December 27), on which 27 garment workers burnt alive to death in the first factory fire in 1990. 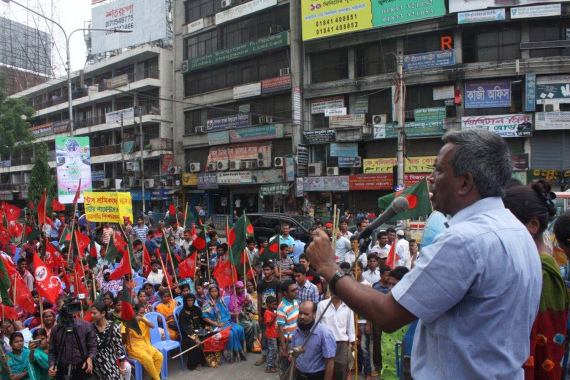 Amirul Haque Amin at a rally 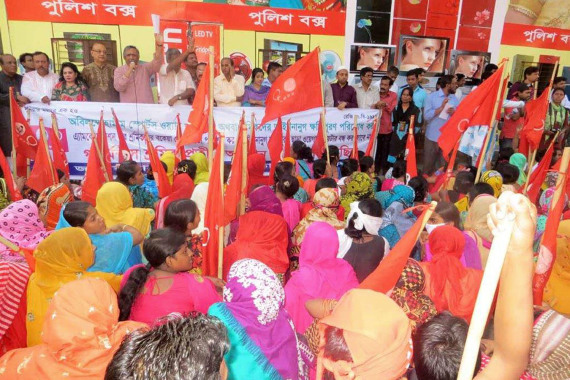 Some progress has been made since the 1980s, including the right to a week's vacation, a paid holiday on 1 May and the establishment of a minimum wage, which is although low. However, many problems still remain.

This is especially true concerning the frequent and absolutely devastating fires and factory collapses that have occurred in recent years. The most devastating of these events occurred on 24 April, 2013, when the collapse of the Rana Plaza building in Dhaka led to 1,135 worker fatalities and more than 2,000 injuries. To make matters worse, many of the fashion companies whose products were manufactured in this factory have yet to pay any compensation.

NGWF has been asking major companies to sign an agreement concerning Fire and Building Safety even before this disaster. In fact, the agreement was drafted in 2012 and yet a majority of the companies still refuse to sign it. Moreover, the Bangladesh Garment Manufacturers and Exporters Association lashed out at Amin for airing workers’ grievances and acting against the interests of the industry.

Presentation of the 2015 Award

To top of page URL of this page
<http://www.nuernberg.de/internet/menschenrechte_e/amin_e.html>