Already in summer 1993 the former Lord Mayor Dr. Peter Schönlein addressed the public with his initiative to establish the Nuremberg International Human Rights Award. He was inspired by the project of the "Way of Human Rights": This work of art created by Israeli artist Dani Karavan in Kartäusergasse, a lane right in the heart of Nuremberg, is a reminder of the darkest chapter of German and Nuremberg history, but at the same time also a symbol of hope for a world where all human beings can live in dignity, peace and liberty. This message motivated the City of Nuremberg to make its own contribution to world-wide respect for human rights by establishing an international human rights award.

On September 17, 1995, almost exactly 60 years after the publication of the National Socialist racial laws, and 50 years after the end of World War II, the Nuremberg International Human Rights Award was presented for the first time. The award is the City of Nuremberg's answer to the state-decreed crimes against human rights of those years and is intended to symbolise that no signals are to radiate from Nuremberg but those of peace, reconciliation and respect for human rights.

The award is not only intended to honour the achievements of its awardees, but furthermore to contribute to the protection of endangered human rights defenders and to encourage others to commit themselves to human rights. It is endowed with 15,000 Euros and is presented every two years to individuals or groups who have, in an exemplary manner, committed themselves to human rights, sometimes at considerable personal risk.

The award and the message it radiates have quickly found international attention and recognition. The first award ceremony was held under the patronage of José Ayala Lasso, then United Nations High Commissioner for Human Rights. The jury, originally comprising nine members, is currently made up of renowned personalities from all over the world. The jury members decided on the awardee by majority vote.

The high standing of its jury and the support lent by the United Nations, UNESCO and renowned non-government organisations have contributed to the fact that the award has in the meantime won considerable international repute and its intention of protecting human rights defenders is beginning to take effect. 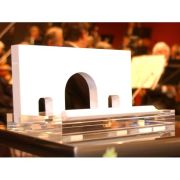 To top of page URL of this page
<http://www.nuernberg.de/internet/menschenrechte_e/menschenrechtspreis_e.html>